3 Comments Posted by ChrisJohnRiley on February 5, 2009

Sometimes, no matter how hard you try to do something good, you end up doing something stupid. No, I’m not talking about my friend Bob this time 😉 This time it’s the creator of a (over)helpful user awareness email doing the rounds.

I was lucky enough to find a copy of this sitting in my email-box this morning, and thought it was something worth commenting on. 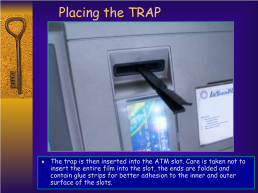 The PowerPoint presentation walks a user through how ATM thief’s can steal your card and PIN number using simple social engineering attack and a small piece of x-ray film. The message is a good one, and the creators (as it doesn’t appear to be an official bank creation) have their hearts in the right place. Helping poor the defenceless public is always a good thing. With that said, this PowerPoint also reads like a step by step guide for your average scumbag thief to begin running this scam on your local ATM.

Sometimes a little too much information is a bad thing. This awareness campaign would have been just as effective without all the fine detail on placing the x-ray film to catch the card. At least let the bad-guys do their own experimentation instead of handing them a proven and tested recipe.

Take a look and tell me what you think. –> DOWNLOAD