2 Comments Posted by ChrisJohnRiley on April 4, 2009

I’ve been playing about with the com-on-air and tools from dedected for a few weeks now. Results are mixed, as those who’ve sat through eth few demos I’ve run can certainly attest to. Things are still in the early phases for the dedected tools and as much as I love what’s already there, it’s not really ready for the mainstream yet. Don’t get me wrong, whats been done is already amazing work, but for the penetration testers amongst you wanting to grab a com-on-air card from ebay and starting running tests, things aren’t always going to be 100%. Still, it makes managers sit up and pay attention if demonstrated correctly.

As an example of the issues, I’ve build the drivers and tools from source on 3 or 4 systems now (Fedora, Debian, and Backtrack 3 and 4). Compiling resulted in mixed results (some compile errors) and random capture failures (just capturing static as if the course was encrpyted). You’ll also probably get a few kernel panics before you learn to respect the driver and not expect hotswap support just yet. After one too many hit and miss captures from the compiled versions, I opted to go for the Chaox-ng boot USB which includes everything (yes I do mean everything) built in. I find that this USB boot option just adds to the effect when it comes to demos. You turn up with a PCMCIA card and a 1 GB USB stick. That and any laptop will do the job. 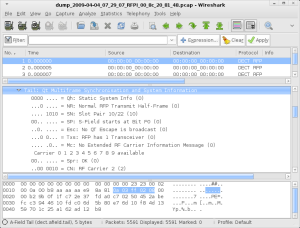 The Chaox-ng distro includes the drivers and tools compiled to perfection (no capture issues here). The latest version also includes the SVN version of Wireshark (with DECT PCAP support). Kismet newcore is compiled in with the DECT plugin if you want to play about with this as well. About the only thing missing is the Metasploit auxiliary modules, but that always was just a Proof of Concept and not very functional. Personally I stick to using the ‘dect_cli’ tool (alongside pcapstein, pcap2chan and Wireshark). For those that are interested I’ve uploaded a few packet captures for you to take a look at.

The Plantronics PCAP’s are interesting to look at and see how the communications between the base unit and headset are handled. At this point I’ve not looked too much into the encryption implmented. From a couple of test calls the Plantronics appears to initiate the call and then encrypt a fraction of a second after the call begins. I’m leaning towards a standard implementation of DSC (DECT Standard Cipher) instead of a propriatary Plantronics implementation. Pity, as I was hoping for something in the pairing process that would signal a handshake and key creation process. I’ll leave the encyption work to people much smarter than me however. I just like to play with the new toys 😉

DSAA (DECT Standard Authentication Algorithm) has already been reversed (see details here and the paper on the subject here). So next up will be the DSC hopefully. We’ll have to see how much longer the “Security through obscurity” of DECT works. I hope, for their sake, that they’ve implemented defence-in-depth 😉