There are many memories from this years Defcon, but the one that really seems to stick with me the most (other than riding back from a club in a pimped out armoured truck of course), is a conversation I overheard while hanging out, waiting for the next talk. Now, I’m usually respectful of people’s privacy, especially at an event like Defcon, but as soon as I heard the words “Hi I’m a journalist, can I ask you a question” my ears pricked up. Normally Defcon isn’t friendly to reporters asking questions, but the people being asked seemed happy enough to talk, even if their answers didn’t meet with the journalists requirements. After a few minutes the whole thing came to an end with “ah ok, you’re not from the US?” and that was it.

Needless to say, this journalist had a story, and was out to get the facts to back it up… whether or not the story was right, or representative of more than 0.001% of attendees seemed incidental. To me this is the epitome of bad reporting. The only thing worse than not coming at all, is coming with a fixed notion of what you’ll find, and ignoring anything that doesn’t confirm that fact!

If you’ve followed the news at all since getting back from the Vegas conferences (Blackhat | BSidesLV | Defcon) you’d have seen news coverage of .:

What you probably saw very little of, was coverage of the good that comes out of Defcon. Sure CNET posted a nice piece on how Johnny Long has started Infosec without borders, but even then they had to go with the inflammatory title of  “Hacker launches volunteer program for security professionals”. Where was the coverage of the Bloodkode? What about the “Be the match” drive at Defcon? I see lots of blogs and forums mentioning it, but nothing outside of that! Almost every outside reference to the Defcon kids event was talking about CyFi and her hack, or about how evil hackers are corrupting kids. Get over yourselves already! Kids have to put up with enough mind numbingly boring stuff at school most of the time. How about letting them learn something useful, interesting and creative… Anyway, I digress. Back to the topic at hand.

If you have to ask why the press take this angle, then you’ve obviously not been paying attention the last few years. Apart from the obvious “bad news sells”, hackers are the red-headed stepchild of the media. If you want to paint a portrait of a villain, then who better than an evil blackhat hacker! and if you call yourself a hacker, you must be bad right!

Hackers have an image issue. We’re not all odd, but to be honest, we’re creative and normal is boring.

I could find no better example of this (in my 5 minutes spent Google hacking) than an “article” on TGDaily “discussing” the Defcon Kids conference (published prior to it taking place) –> “Defcon trains child hackers“. Well done, what an amazing piece of journalistic artistry you have created there. Did the journalist in question attend Defcon kids? Does she know what REAL hackers are like? Has she ever met and talked to a hacker other than reading #Anonymous press releases and the odd Turkish skiddie defacement? Now, It’s not the fault of any 1 person, and I don’t mean to single out the author of this piece in particular. It’s one of many negative articles I’m sure. I question the mentality of these people… they fear what they do not understand, so they lash out like children on a playground. 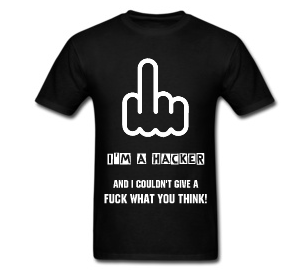 So what’s the solution here… what’s the hacker communities 12 step program to a better public image that hacking isn’t bad, it’s what drives innovation and helps the world evolve!

I have to tell you, I don’t have a solution… and to be honest when it comes to the media, they’d always find a way to demonize things they don’t understand.

All I can do is stand up proud, don a black t-shirt and shout “I’m a hacker, and I couldn’t give a fuck what you think!”