3 Comments Posted by ChrisJohnRiley on August 26, 2011

I’ve never really been interested in the whole “I’ve got more followers than you” stuff people on twitter sometimes get into. At least, not to some crazy level. Sure, I checked my follower list every now and then (mostly just to cull the spammers etc..) but that’s about as far as it went. Still, when I moved over to using Seesmic I couldn’t help but see these odd little >K symbols and final, curiosity got the better of me.

What I found on Klout when I signed on was interesting, at least interesting enough for me to share with you guys…

So… lets see what other gems they have for me shall we. Lets start off with the profile and see what they can tell me that I don’t already know about myself. After all, they know things I don’t I’m sure.

Ok, seriously, I get that 61 is a big thing for you, but I’ve still no idea what the scale is, so for me, it’s kinda like a big sign that say “Dunce”. What else do you have for me. Ok I’m an influencer of 1K (I’m guessing that’s 1 thousand, although I doubt that highly… why would anybody listen to a chump like me for goodness sake!). Ok, now this makes more sense… apparently I’m influential about Information Security, hacking, and popcorn! This must be some sort of weird twisted version of me that likes to eat sweat (and/or salty) snacks and talk about them endlessly on social media! It’s a strange world… but wait a minute. It says I’m a specialist! At least it didn’t say thought leader (hint: checkout my Eurotrash Security co-host @CraigBalding’s Klout page).

So what is a specialist, at least according to Klout. Ah such nice words… I’m not a celebrity (thank fuck for that) but I’m still special… it’s like Klout is somehow there to reinforce people’s ego and make them feel less like the people they really are. Lots of tweeting about a single topic doesn’t make you a specialist… it makes you a loudmouth who doesn’t know when to shut up.

I disagree with your opinions here Mr Klout sir… so, some playing around in the DOM will fix this up quick proper I think! A little tweak here, a correction there….

There, that looks so much better than before. I wonder what other misguided ideas they have about me. Lets take a little look in the score analysis. Ooooh look, pretty charts with lines on them. They go upwards, this must mean that something great is happening right? Pity the history only goes back a month or so. Guess they don’t like large (i.e. realistic) data sets. Well at least they give a scale on some of these things. Still, just a chart on its own doesn’t help much. Lets see if I can compare a chart from me to a chart from somebody who really HAS some Klout… HD Moore for example. (sorry HD, first name that came to mind)

Wow… if there was ever a result that made you realize that these sort of sites were as useless as a chocolate teapot, it’s this one. 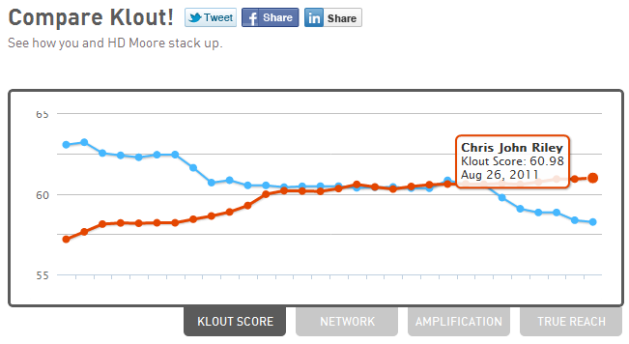 (Almost) no words come to mind to describe this… but I’ll try, as it is a blog after all.

If you think services like this offer you a realistic outlook on who YOU are, then you really need to rethink these misconceptions.

None of this makes a difference. People don’t ignore other people who’s Klout number is less than theirs, and I certainly don’t respect people who have a high Klout number especially. Numbers can say anything you want them to say. They can also lie to you.

TL:DR – Stats like this are based on false logic, bad stats and a desire to make you feel “special” about yourself… be your own little special snowflake and ignore this kind of thing! Talk about what you want to talk about, don’t bow to the pressure to be something you’re not!

3 responses to “Klout: Because we’re all special little snowflakes!”