Largest provider of business management solutions in the world

SAP runs the most critical business process of many companies –> Hence the crown jewels of a company
This talk covers threats to the core and standard SAP applications and doesn’t attempt to cover issues in custom designed applications.

What SAP Security used to be

Traditionally SAP security has come down to segregation of duties. This however offers a false sense of security. SoD are necessary, but are not nearly enough to secure systems of this complexity.
For somebody to exploit segregation of duties the attacker needs access to your SAP system, and a valid account. There are however many issues lower in the stack that could result in non-users exploiting SAP systems. 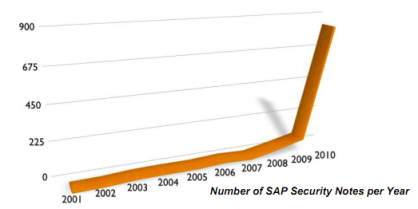 In 2011 so far, there have been around 700 SAP Security Notes released

Not uncommon to find multiple internet technologies in use. SAP systems are nowadays often found on the internet

ICM Web Server requests are handled by the ICF

External attackers are less likely to be caught, but lack the required access to systems.

By putting SAP systems on the internet you’re offering the best of both worlds.

Hard if it’s running through a reverse proxy

Otherwise various information visible to users through the server headers

ITS is prone to very helpful error messages. If you request a resource that doesn’t exist it responds with a lot of useful information.
ICM also exposes the SAP SID information and system numbers
Enterprise Portal provides HTML comments with useful information

Attacks to the ICM

There are over 1500 standard ICF services on a typical SAP ECC install
When requesting a service the SAP system will check if it’s public or private.
Private services require authentication (this is the case for most services)

Most services need authentication.
After authentication the SAP system checks for authorization to run the service
Issues:
Result:

The RFC protocol is used to call an ABAP function module
As RFC is blocked at the firewall this can’t be done directly.
The SOAP RFC Service offers the ability to perform this same call through an SOAP interface, bypassing the RFC block on the firewall
< LIVE DEMO >
Multiple function calls can be made include logging off all active users, spamming messages to all users, through to shell on the remote server…
Shell access involved injection commands into an RFC request.

Authentication is handled by the Java engine
Many organisation have Web Access Management solutions in place (such as SSO) to improve security or make it easier for corporate users.
There are various vendors offering the ability to integrate their solutions
This integration uses the Header Variables Login module
What happens in an attacker can connect directly to the portal? Can he pretend to the be the authentication proxy?
Attack:
< LIVE DEMO >
Found and noted in 2006 on the SAP forums… not fixed!

Enables post exploitation for SAP Portal (much like PHP, JSP, etc…)
In order to use it, he needs to gain admin access to the portal and deploy the shell in the same way you would with JMX, etc…