The pervasive interconnection of autonomous sensor devices has given birth to a broad class of exciting new applications. At the same time, however, the unattended nature and the limited resources of sensor nodes have created an equal number of vulnerabilities that attackers can exploit in order to gain access in the network and the information transferred within. While much work has been done on trying to defend these networks, little has been done on suggesting sophisticated tools for proving how vulnerable sensor networks are. This work demonstrates a tool that allows both passive monitoring of transactional data in sensor networks, such as message rate, mote frequency, message routing, etc., but also discharge of various attacks against them. To the best of our knowledge, this is the first instance of an attack tool that can be used by an adversary to penetrate the confidentiality and functionality of a sensor network. Results show that our tool can be flexibly applied to different sensor network operating systems and protocol stacks giving an adversary privileges to which she is not entitled to. We hope that our tool will be used proactively, to study the weaknesses of new security protocols, and, hopefully, to enhance the level of security provided by these solutions even further.

Set of sensor nodes deployed in large areas of interest

Sensor networks are deployed in thousands of areas used for a range of different purposes including:

Several layers of protection, including implementation of IDS techniques to detect attacks. 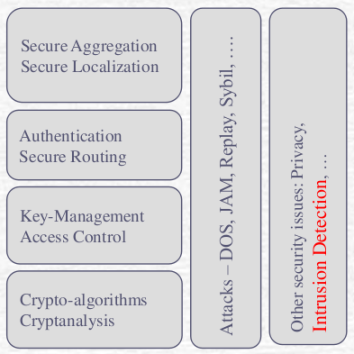 Gathers audit data to be forwarded over the serial port. Listens in promiscuous mode to discover neighboring nodes.

Core component of the tool. Contains a number of attacks.

If it’s possible to become a parent of another node using the Sinkhole attack, the child will send the encryption key to ensure the parent can route the traffic correctly.

When performing sinkhole attacks it is important to avoid routing loops. If another node detects a loop, it will move to another parent in an attempt to correct the issue.

Possibly take advantage of memory related vulnerabilities, such as buffer or stack overflows. Send crafted packets and execute malicious code on the node.

Malware within sensor networks is rare, and not often looked for. Simple malware could go unnoticed. Possibility to create a self propagating worm.

By infecting a single node, it is possible to compromise an entire sensor network.

PoC  targeting devices following the Von Neumann architecture. Malware stored in the heap as it remains empty for the lifetime of the device.

Tool will be released open-source within the next few weeks